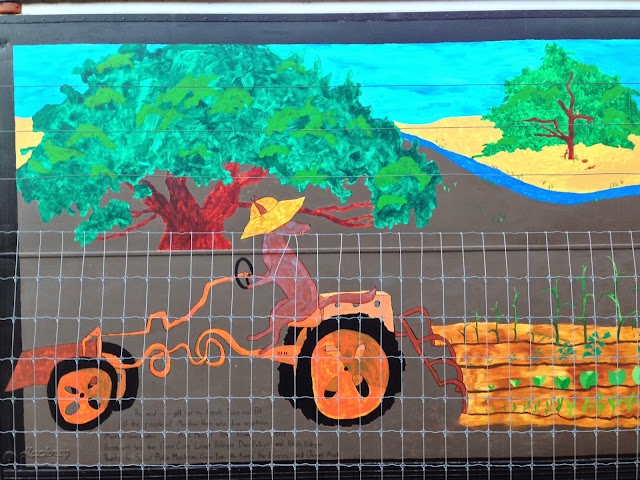 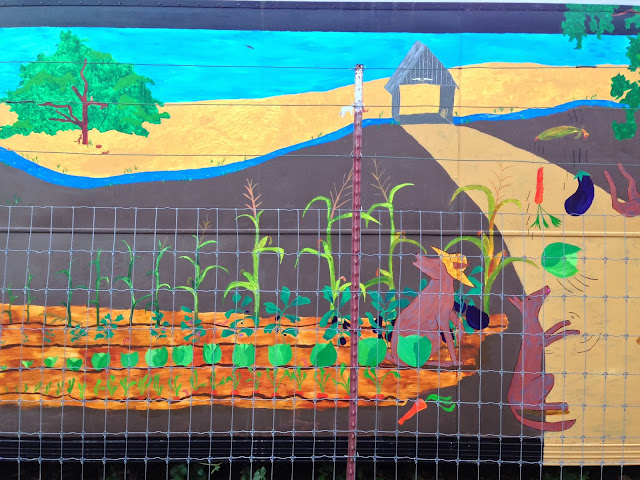 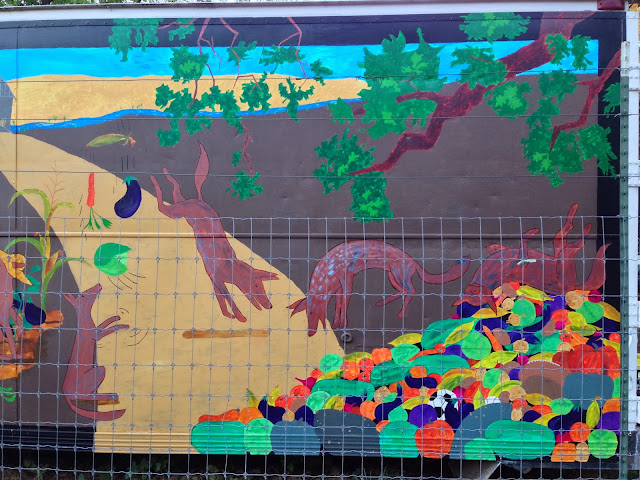 Brent and I painted until dark today, and then kept painting with our headlamps. I took a picture of the mural before it got dark though. Before I show you that, check out how nicely Pat cut up these leeks: 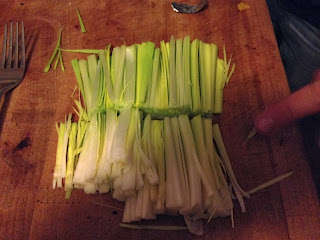 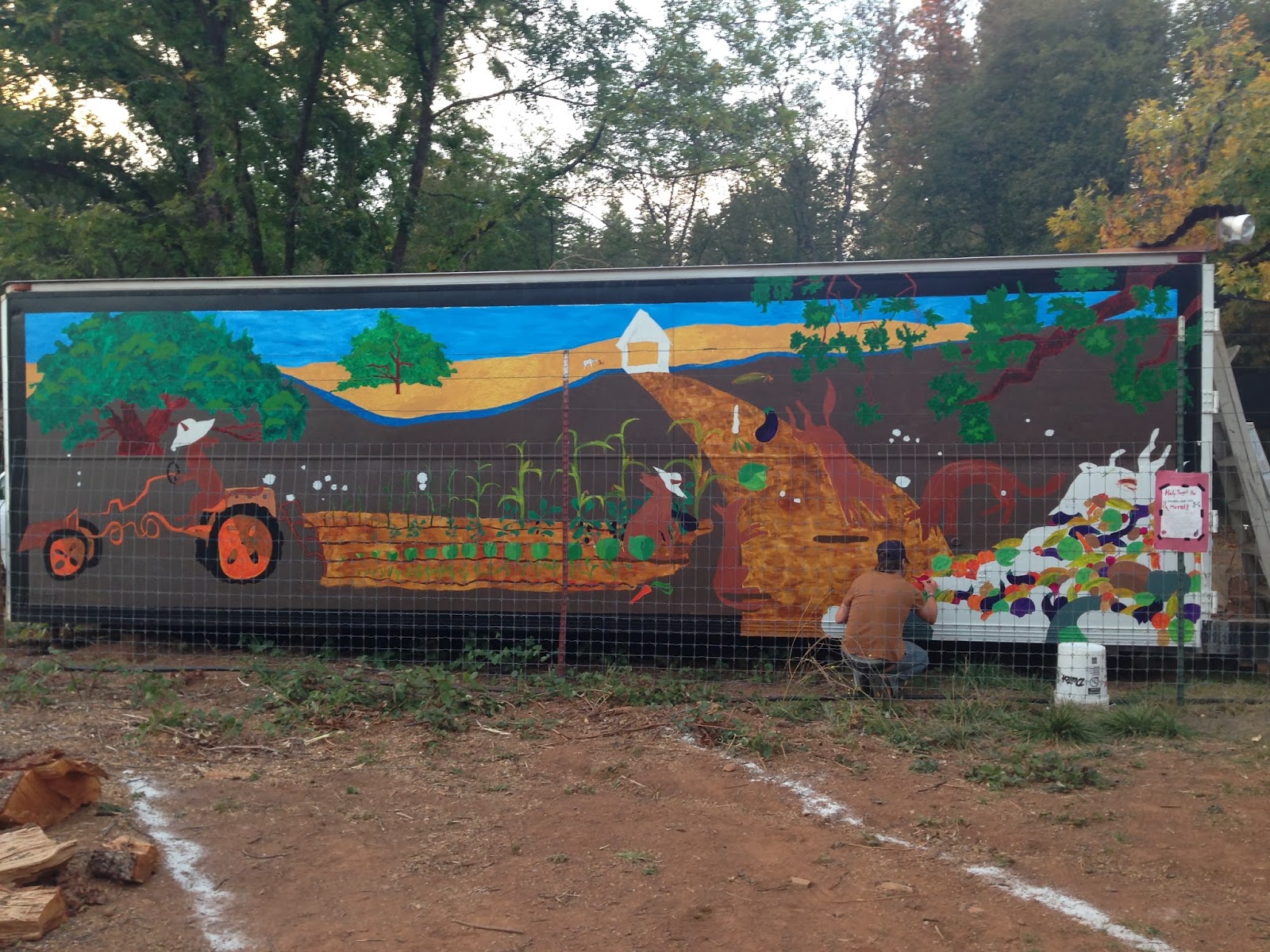 I know the picture sticks out of the blog frame when I make it this big, but I don't care. I'm excited about how the mural looks. 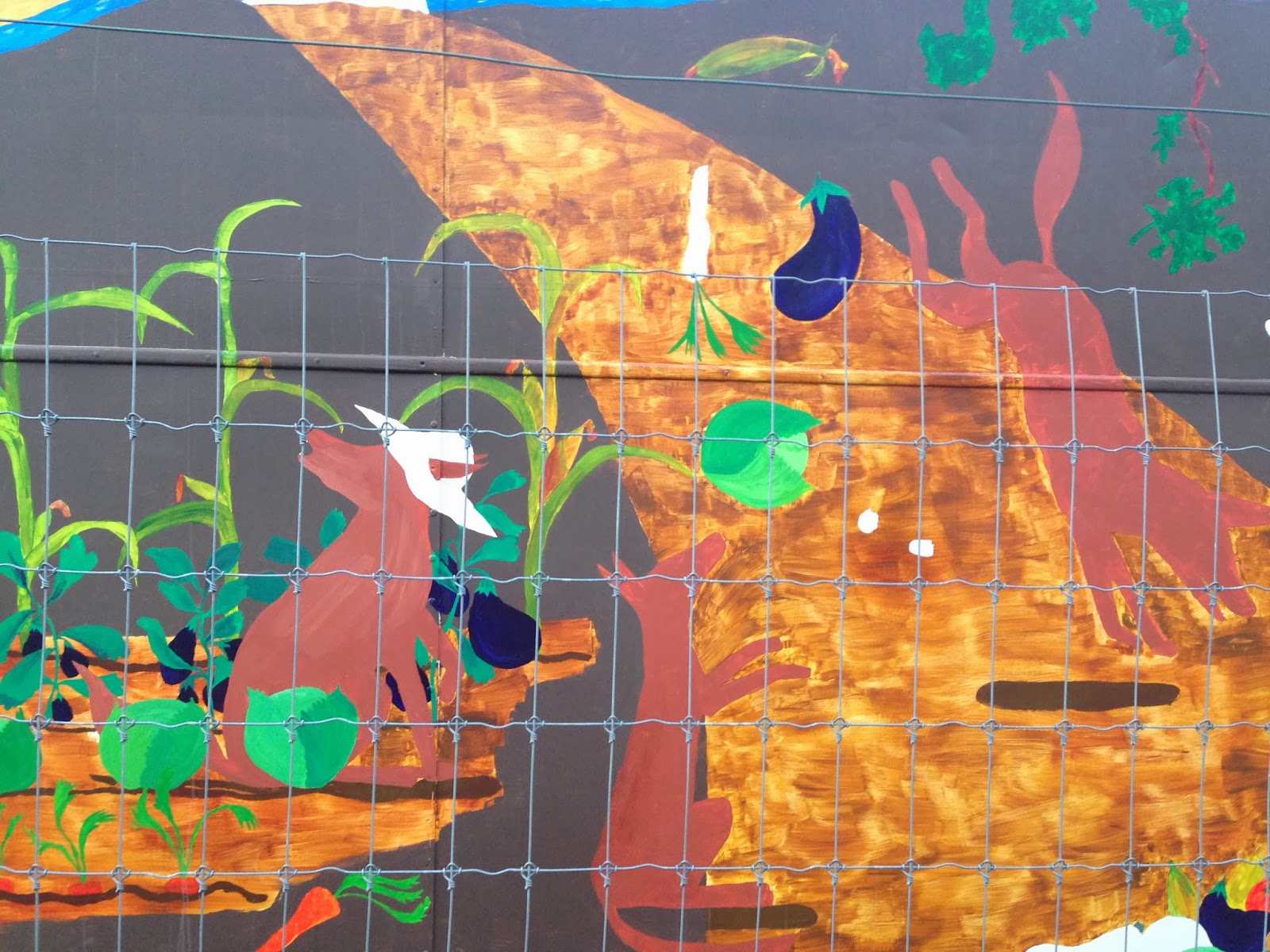 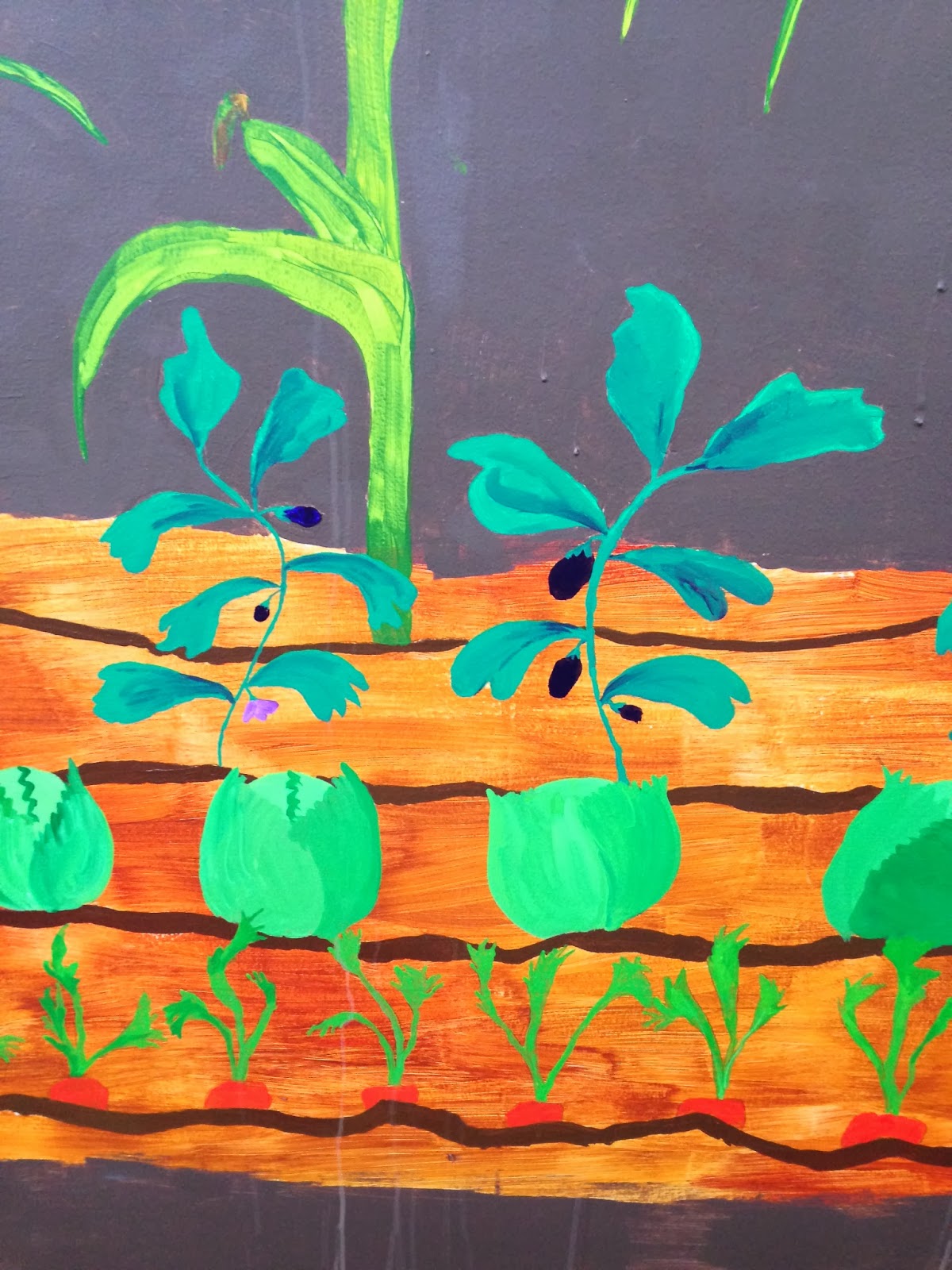 Whoah, that was too close.  You can see the dirt streaks.
No ones' perfect.
Posted by Diana Caplan at 8:10 PM 2 comments: 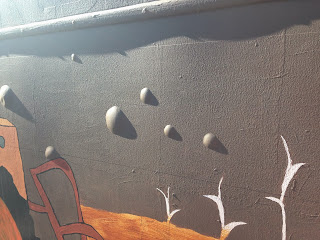 We got back from rafting the Grand Canyon (which was awesome, by the way) and found that the paint and primer have been blistering. Agh!!! How could this have happened??? 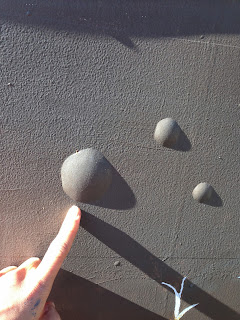 The surface of the shipping container was real dirty when we got back, so I hosed it down. Could the rapid cooling of cold water on the sun warmed surface have caused it? Could it be that the primer has been exposed too long? Could it be the hot sun warming the mural? Sometimes it gets so hot it will burn your hand. Could it be the rain that came down while we were gone? What's happening? Why? Because we have no answers and don't know what to do about it, Brent and I ignore it and paint other things. 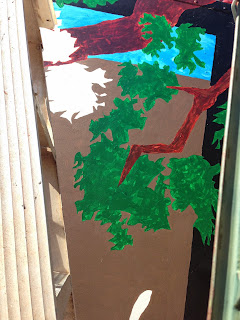 Brent puts the leaves on the tree in the top right corner. I put Falcon the horse, in the field across the creek. 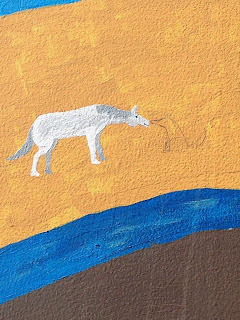 There is a sign on the fence that borders the field across the creek (in real life) where Falcon used to live. It says "Falcon, Gone But Not Forgotten". I never met Falcon, but I guess he used to come up to the fence right where the trail goes by it and greet people. He's touching noses with a coyote in the mural. The idea of Falcon living out there in the field alone makes me a little sad. Horses are social and get lonely. My own horse spent a lot of time being lonely because we didn't know horses are social and didn't really think about it. I think it makes me sad mostly because I still feel guilty about my horse, Canela, being lonely for so many years. Anyway, Falcon is in the mural now.

And so are these confounding paint blisters. I finally decided we should pop them and scrape the paint off, re-prime those spots and re-paint. I'm afraid we won't get it all done by Saturday when Brent and I have to leave again. I'm afraid the mural won't be done before the weather really turns and I can't paint anymore. I'm afraid the paint will keep blistering and peeling off. I'm afraid the whole mural will peel and fall off, hundreds of dollars and hours and hours will fall to the ground in little colorful flakes.

But whatever. There are bigger things to fear. Like having a scorpion on your shoulder. That then runs down your shirt. On the inside. And stings you. That actually happened to Brent while we sat in the van after getting off the river. 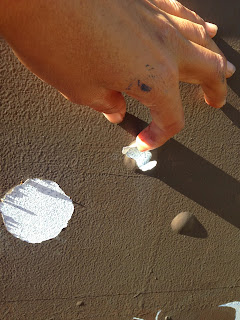 Another thing to fear is finding out the sugar in the cookie dough you just mixed up is actually salt. And now there's not enough butter left for a full batch of cookies. That actually just happened tonight to Pat. He figured it out when Diane tasted the cookie dough and promptly spit it out. Honestly though, that scares me less than the mural falling apart.

Something interesting: After we peeled the paint/primer off we scrubbed it with Simple Green to get our finger oils off so the primer would stick. Here's Pat's mom Gene, washing the spots. 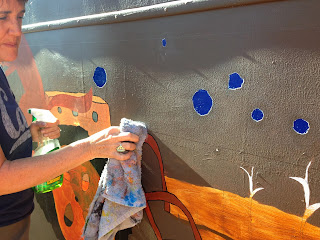 Notice they are blue after their scrubbing. There is another layer of white paint or primer under the primer I put on. It's covering up a bunch of blue and red paint that was already on the shipping container before I got to it. All the paint blisters are on this under-layer of paint. Very interesting. At least to me.

Anyway, it's late and I'm ready for bed. Here's one last picture of the blue spots getting primed again. We'll see what happens. 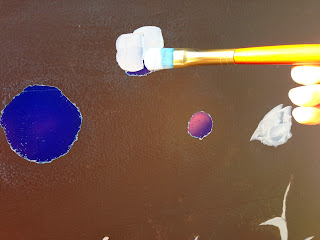